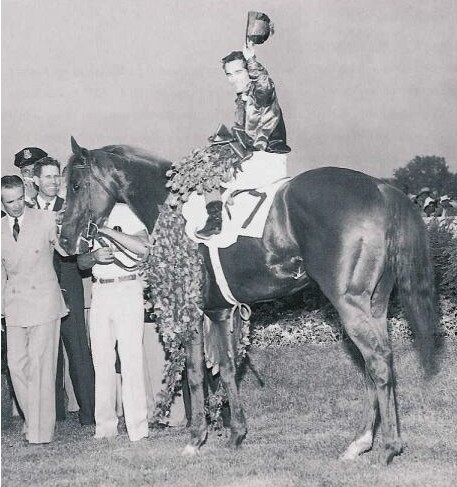 Foaled in the California desert on March 1, 1952, Swaps was a chestnut grandson of the English champion Hyperion. His sire, *Khaled, had raced at Royal Ascot before his importation into the United States. His dam, Iron Reward, was out of Iron Maiden, a daughter of War Admiral and Betty Derr, the stakes winning half sister to Kentucky Derby winner Clyde Van Dusen.

In the 1950's, California was not yet the important American breeding center that it is today, and the colt's royal heritage seemed far removed from his desert birth. Rex C. Ellsworth, his owner and breeder, and his trainer, Mesh Tenney, had opinions which conflicted greatly with the beliefs held by Kentucky horsemen, feeling that horses didn't need the "coddling" that eastern thoroughbreds received. Swaps was never turned out, but instead spent his days in a stall, and when his career began, he was raced often, despite the fact that he was never sound. Eddie Arcaro called him "the worst managed horse in history."

At two, Swaps broke his maiden the first time out, winning a five furlong purse at Hollywood Park by three lengths on May 20, 1954. In his next start Swaps ran third in the Westchester Stakes. He won his first stakes race the next time out, taking the June Juvenile Stakes at Hollywood by two and a half lengths.

Twelve days later he was third behind Mr. Sullivan in the Haggin Stakes. He then ran out of the money in the C.S. Howard Stakes. After the two failed efforts in stakes races at Hollywood Park, he was given some time off.

Swaps returned to the races with rider Bill Shoemaker in the saddle on December 30. The pair won the Amarillo Ranch Purse at Santa Anita Park by a nose. His juvenile campaign thus concluded with three wins and $20,950 in earnings.

As a three-year-old, Swaps proved himself to be a Kentucky Derby candidate. On January 19, he won the San Vicente Stakes by three and a half lengths in the mud. He came out of the event with an infected abscess in his hoof, but missed only twelve days of training after Tenny opened the hoof and drained the abscess.

In February he ran in the Santa Anita Derby, only a month after the San Vicente. Johnny Longden substituted for Bill Shoemaker in the race. Despite failing to run a straight line in the stretch, he still scored a victory in the event, earning himself passage to Louisville.

Swaps headed east to meet the favored Nashua and talented Summer Tan at Churchill Downs. Tenney, unwilling to pay for a Louisville hotel, bedded down in the colt's stall, an act which created much public interest in the western challenger. The horse himself was virtually ignored in the hubbub surrounding Nashau and his rematch with Summer Tan.

Swaps gained more attention when he won his prep race, the Jefferson Purse at Churchill Downs, by eight and a half lengths in near track record time.

When Derby Day came, Nashua, ridden by Eddie Arcaro, was still the favorite, with Swaps and rider Bill Shoemaker as the second choice. Swaps raced to an early lead, and holding off an impressive stretch drive by Nashua, he drew clear to win by a length and a half. Nashua had also run an outstanding race, as proven by the six and a half lengths of daylight between him and Summer Tan.

That night the winning Derby trainer moved to fancier digs. He slept in his car, and let Swaps have the stall to himself.

The chestnut colt's victory was made even more impressive by the fact that he wasn't sound. The split hoof wall on his right forefoot, suffered in January, was inflamed. Swaps headed back to the west coast, while Nashua went on to Pimlico, easily scoring victories in first the Preakness and then the Belmont Stakes.

Swaps, in the meantime, raced on his home turf, scoring by twelve lengths in the Will Rogers Stakes, and then taking on older horses, including 1954 Kentucky Derby winner Determine, in the Californian Stakes. In setting a new world record of 1:40 2/5 for a mile and a sixteenth in that race, Swaps gave the impression that he was merely cantering. And perhaps he was. The following year, Swaps covered the distance in an astounding 1:39.

The gallant chestnut was merely cantering again when he took the Westerner Stakes. Bill Shoemaker eased him in the stretch as he coasted home six lengths ahead of Fabulous Vegas.

Nashua's people were anxious to prove that he could avenge his Kentucky Derby defeat. A match race, worth $100,000 to the winner, was set up between the two on August 31, and Swaps had amassed eight straight wins when he arrived at Washington Park.

Swaps stretched his winning streak to nine races when he beat Traffic Judge, winner of the Withers Stakes and the Ohio Derby, in the American Derby ten days before the match, equaling the American record for a mile and three-sixteenths on the turf in the process.

The day before the match, Swaps came back sore from a mile work on a wet track. Ellsworth and Tenney decided to send him out against Nashua despite the injury. The crowd, unaware of the situation, made Swaps the favorite. But the race was not a fair contest, with Swaps trailing behind for a mile and a quarter, finally losing by six and a half lengths. Swaps was obviously not himself, and Nashua's winning time of 2:04 1/5, far slower than Swaps' Kentucky Derby winning time of 2:01 4/5 earlier that year, proved it. Olin Gentry, the manager of Darby Dan Farm where Swaps later stood stud, said:

"I liked Rex Ellsworth, but I guess I can never forgive him for letting Swaps run and get beaten like that. He was so sore he didn't know where to put that foot down."

Even Ellsworth himself later admitted that he had been wrong in running the game horse. Only after an operation and almost six months of work was Swaps able to race again, winning the L.A. County Fair Handicap under 127 pounds.

Despite his return to the track, Swaps still wasn't sound. Racing on three legs, the brave horse carried as much as 130 pounds to victory in eight races, setting four world records and equaling another.

Not sound enough for the Santa Anita Handicap, Swaps headed for Florida instead. In April, Swaps ran at Gulfstream Park and won the Broward Handicap under 130 pounds. His time of 1:39 3/5 was a new world record for a mile and seventy yards.

A month later he was beaten by a head by former juvenile champion Porterhouse in the Californian Stakes while giving away nine pounds. Rider Bill Shoemaker was accused of accidently easing his mount. Next came the Argonaut Handicap, in which Swaps covered the mile in 1:33 1/5. It was a new world world record.

In the Inglewood Handicap he once again was burdened with 130 pounds, and won by two and three quarter lengths. He broke his own world record in the process, covering the mile and a sixteenth in 1:39.

Swaps again carried 130 pounds to victory in the American Handicap, equaling Noor's world record of 1:46 4/5 for a mile and an eighth.

In winning the Hollywood Gold Cup, Swaps touted 130 pounds and ran the mile and a quarter in a stunning 1:58 3/5. The time was a full second faster than the track record. He set another world record when he won the Sunset Handiap by more than four lengths under 130 pounds. His time for the mile and five eighths was 2:38 1/5.

Swaps ran out of the money for the first and only time in his career in the Arch Ward Memorial Handicap at Washington Park. He was obviously sore, yet only days later won the Washington Park Handicap, beating Summer Tan by two lengths. The fractions for the race were spectacular. Summer Tan had gone the first half in :44 1/5. Swaps took command and covered six furlongs in 1:07 4/5, which was two-fifths better than the world record. At the mile, the time was 1:33 2/5. It was a fifth of a second slower than his own world record, but it was still faster than the previous world record, set by Citation in the Golden Gate Mile.

Swaps underwent surgery twice more as the United Nations Handicap approached. He was scratched from the race, had an abscess drained, and was pointed instead at the Washington, D.C., International.

Then, during a gallop at Garden State in October, Swaps broke his near hind leg in two places. A few days after the accident, the great horse's life was endangered when his cast broke. But Sunny Jim Fitzsimmons, who trained Nashua, came to the rescue, designing a sling which allowed him to be suspended from the ceiling. By the time the bone had healed, Swaps had lost more than three hundred pounds, but had remarkably retained his friendly disposition. He had also been named 1956 Horse of the Year.

Thousands of fans turned out at the airport to bid a fond farewell to the California Cripple when he returned to the west coast. His stay in the desert was short lived, however. In 1957, Swaps flew east again, this time permanently. John W. Galbreath paid two million dollars for Hyperion's finest grandson and brought him home to stand stud at his Darby Dan Farm. Swap's son Chateaugay won the Kentucky Derby and Belmont Stakes in 1963, and his daughter Primonetta was named Champion Handicap Mare in 1962, as well as Broodmare of the Year in 1978. Another daughter, Affectionately, earned two divisional championships as well as Hall of Fame honors, and produced the 1970 Horse of the Year Personality. 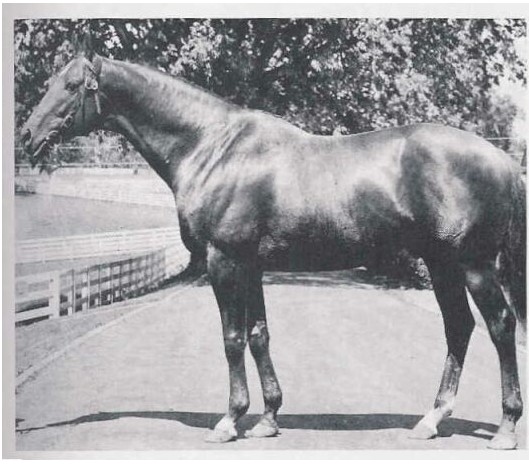 Swaps also sired Intriguing, the dam of Numbered Account, and thirty-five stakes winners including No Robbery, Eurasian, Irish County, and Fix the Date.

Swaps was granted entrance into the Hall of Fame himself in 1966. He passed away in the fall of 1972, while at Spendthrift Farm in Kentucky. When the century drew to a close, Blood-Horse honored Swaps by placing him twentieth on thier list of the best horses of the century.